Aqualuft is developing Queen At Arms, a GxB dating sim built in Ren’Py. Queen At Arms is about a young girl who joins a medieval army and has to survive a terrible civil war. In order to live, you have to make tough decisions, similar to Telltale’s Walking Dead series.

Click on any image for a link to the demo download page. (Runs in Windows, Mac, Linux)

Eventually you become the army’s de-facto commander, and you must manage the morale of your men and the lives of your troops in-battle. The datable characters are the various army experts who you employ. For example, Rubus (right) is an Archmagus whose magical skills can provide clever ways to bypass obstacles in battle. Lucius the Head Cleric (left) is an expert in medical matters and can preserve the lives of your troops with the right medicine. 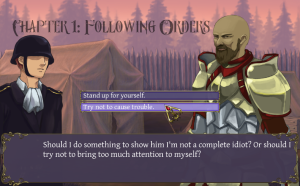 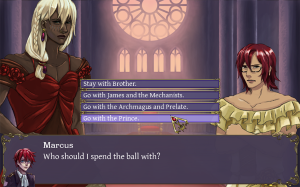 The game is composed of 4 chapters. As you might expect for an Otome game, we have a predominantly female team. Emily So, Lilinn Tan, and Meagan Trott are our artists, and Serenity Frost, Diana Taylor, Charlotte Fieldcamp, and Nina are our writers.

Queen At Arms follows the “string of pearls” method of interactive fiction, where a linear sequence of complex scenes are strung into a narrative. Each scene is an explosion of choice, that boils down into a handful of outcomes and set flags that are then referenced in further scenes. This is the most efficient method for creating a sense of player agency and real consequences, while still being reasonable to develop. We prototype complex scenes in Twine first, then implement them into the Ren’Py interpreter.

King’s Ascent is a Flash platformer made by the Aqualuft team! In this game, a King flees upwards through floating castles while using platforms to slay a series of beasts. To play, click here or on the image below. 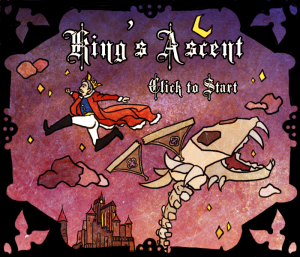 Arrows and escape can be used to skip cutscenes if you’re impatient. The King can be controlled with the WASD or arrow keys. Spacebar or up-arrow are used to jump. The longer you hold the jump button, the higher you jump. Volume is adjusted with + and – in the upper right of most keyboards.

Our credits song was performed by Debs and Errol and can be found here: http://debsanderrol.com/wiki/index.php?title=Life_on_the_Throne

All feedback is welcome! 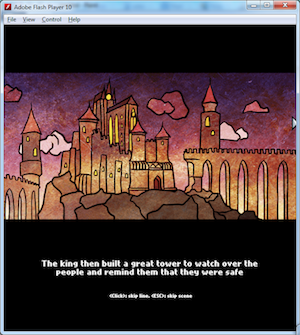